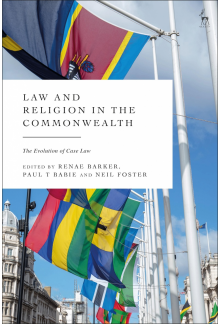 Price:
Add to cart
Add to wishlist
Whe don't have this product
Delivery in Lithuania within 3-6 weeks
Delivery in Lithuania within 1-3 working days
Delivery in Lithuania within 3-6 weeks
Delivery conditions
Description
This book examines law and religion from the perspective of its case law. Each chapter focuses on a specific case from a Commonwealth jurisdiction, examining the history and impact of the case, both within the originating jurisdiction and its wider global context. The book contains chapters from leading and emerging scholars from across the Commonwealth, including from the United Kingdom, Canada, Australia, Pakistan, Malaysia, India and Nigeria. The cases are divided into four sections covering: - Foundational Questions in Law and Religion - Freedom of Religion around the Commonwealth - Religion and state relations around the Commonwealth - Rights, Relationships and Religion around the Commonwealth. Like religion itself, the case law covers a wide spectrum of life. This diversity is reflected in the cases covered in this book, which include: - Titular Roman Catholic Archbishop of Kuala Lumpur v Home Minister on the use of the Muslim name for God by non-Muslims in Malaysia - The Church of the New Faith v Commissioner of Pay-roll Tax (Vic) which determined the meaning of religion in Australia - Eweida v UK which clarified the application of Article 9 of the European Convention on Human Rights - R v Big M Drug Mart on the individual protections of religious freedom under the Canadian Charter of Rights. The book examines how legal disputes involving religion are among the most contested in the courts and shows that in these cases, passions run high and the outcomes can have significant consequences for all involved.