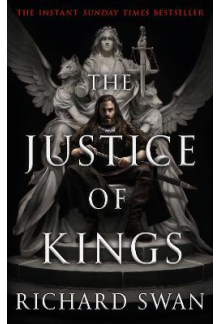 The Justice of Kings 1 Empire of the Wolf

'Utterly compelling, thoroughly engrossing and written with such skilful assurance I could barely put it down' Nicholas Eames

NO MAN IS ABOVE THE LAW

The Empire of the Wolf simmers with unrest. Rebels, heretics and powerful patricians all challenge the power of the imperial throne.

Only the Order of Justices stands in the way of chaos. Sir Konrad Vonvalt is the most feared Justice of all, upholding the law by way of his sharp mind, arcane powers and skill as a swordsman. At his side stands Helena Sedanka, his clerk and protege, orphaned by the wars that forged the empire.

When the pair investigate the murder of a provincial aristocrat, they unearth a conspiracy that stretches to the very top of imperial society. As the stakes rise and become ever more personal, Vonvalt and Helena must make a choice: will they abandon the laws they've sworn to uphold in order to protect the empire?

Introducing an unforgettable protagonist destined to become a fantasy icon, The Justice of Kings is an unmissable debut where action, intrigue and magic collide.

Praise for The Justice of Kings

'A brilliant book, with intrigue, excellent character arcs, a brutal magic system and a story I just could not put down' Grimdark Magazine

'An absorbing fantasy murder mystery . . . I have been thoroughly hooked by this series and cannot wait for the next helping of political upheaval' Fantasy Book Critic

'Fantasy, mystery, drama, intrigue, action - The Justice of Kings has it all' Bibliosanctum

'One of those utterly compelling and believable books that begs to be read in one sitting. This is going to be one of the standouts of the year' British Fantasy Society

'Swan's debut is a thrilling epic fantasy with a murder mystery and supernatural twist that will delight fans of Sherlock Holmes. It certainly delighted me' Fantasy Hive

'Swan has built a dark and gritty world, filled it with beautifully written characters and lays out a master-crafted story to create an incredible book that you can't put down' FanFiAddict

'A brilliant book, with intrigue, excellent character arcs, a brutal magic system and a story I just could not put down' Grimdark Magazine